The Coen Bros. have an urge for going to the New York folk scene

the Coen Bros told an audience at New York's Lincoln Center earlier this month that they were working on a music-related film, but didn't offer many specifics.

Now a clearer picture is emerging on the subject of that movie: the Greenwich Village folk scene partly through the eyes of its larger-than-life patriarch.

According to a source who was briefed on the project but who declined to be identified because he was not authorized to speak on their behalf, the Coen Bros. are working on a script that's loosely based on the life of Dave van Ronk, a legendary musician who presided over New York city's iconoclastic coffeehouse period of the mid-20th century.


et mensah with victor olaiyah/the "evil genius" and the godfather of ghganaian highlife join forces on this fabulous gem ... (1983)


hoagy carmichael's original vocal version for stardust .... (around 1935, his first recorded version was purely instrumental)/bing crosby's original version of the song, with the famous john scott trotter orchestra(1930 or 1931)

he was the closest pianist/singer/bandleader/composer that ever came to hoagy carmichael, but his fame was sort lived ... in fact he's now just known by a few conaisseurs as author of more than ten lovely compositions, let's call them standards, as accomplished in their old fashioned way, as carmichael's very best: rural life, old folks, country melancholy, sensual romance, faithful memories ... there's not any vinyls or cds about him, just rare 78s ... some of them you may listen to on youtube (i'll tell you in 5 or 6 weeks what a new obscure compilation of his 20's work i've just ordered from a small re-releasing record company (superbaton), sounds like ... in the meantime, here's what the book has to say about willard robison ...
willard robison/munequita tango (1927)
Willard Robison was born into a Missouri family with a long line of preachers. He broke with tradition, to the consternation of some family members, and pursued a career in music. But he carried his religious values and the love of small-town, rural America into his songs. He was heavily influenced by Negro spirituals, and his early songs often had religious themes such as Religion in Rhythm, The Devil Is Afraid of Music (which the sheet music calls “a syncopated sermon”), and Truthful Parson Brown which appeared in a 1929 film, The Broadway Melody. He played piano, participated in college musicals, and formed his own band in 1917, The Deep River Boys, which toured the Midwest and Southwest. Paul Whiteman heard Robison in Omaha and signed him to a three-year contract.
In New York Robison recorded piano solos and vocals and made piano rolls for the Duo-Art Company. His singing style was straight-forward--like a Johnny Mercer or Hoagy Carmichael without the southern accent. He also played with Busse’s Buzzards, a group led by Whiteman trumpeter Henry Busse. Robison developed his own radio show, The Deep River Hour, on WOR in New York. By 1931 the show was running three times weekly. He signed a contract with the distinguished William Grant Still, one of the country’s foremost composers often referred to as the Dean of American Negro Composers, to write orchestrations for the band. Trombonist Jack Teagarden, who had played with the band in Kansas City in 1924, occasionally joined them to record. But after seven years Robison felt that commercial demands compromised his music and he quit the radio show.
Robison wrote the theme song for the Jack Tremaine Orchestra, Lonely Acres, and Whiteman’s first theme song, Peaceful Valley. In 1962 Teagarden recorded an album of Robison’s songs entitled Think Well Of Me, and he included two Robison tunes on another late Teagarden album, Mis’ry and the Blues, . In 1976 vocalist Barbara Lea recorded a Robison tribute album, The Devil Is Afraid of Music. The lyrics of the title song express Robison’s optimism: “When there’s music in the heart, you won’t find room for evil.”
Robison’s contributions to the jazz standards include Old Folks, written in 1938 with lyricist Dedette Lee Hill, which is the title cut of a Walter Bishop, Jr. CD, and 1929’s A Cottage for Sale, written with lyricist Larry Conley, which became a million seller in 1945 for Billy Eckstine and was memorably recorded by Chris Connor in 1956 (who also recorded Old Folks). In 1948 Peggy Lee had a hit with Don’t Smoke in Bed which was also frequently performed by Nina Simone. The song is variously credited to Robison or to Lee, her husband Dave Barbour, and Robison.
Although Robison often wrote of the simple life, his music was quite sophisticated. His arrangements, in which he often used strings and oboe, had a symphonic flare. He also composed the eight-part American Suite in the ‘20s, Six Studies in Syncopation for piano, and the five-part Rural Revelations.


willow weep for me/best version is not billie holiday's, it's louis armstrong's 1957 fabulous turning around the melody (with oscar peterson, 1957) ... ... took me 45 years to appreciate it (the whole record, louis armstrong meets oscar peterson is one of the best vocal vinyls ever recorded ..)
Publié par skorecki à 03:53 1 commentaire:

king of crooners (bing with a beat)

there were only two authentic crooners (with the exception of anglo/greek/lebanese al bowlly, and some of the great primitive charm singers, russ columbo, gene austin ...): dean martin, and his role model, the one and only bing crosby .... now, you must understand that the greatest ballad singer ever, mr sinatra, NEVER was a crooner ....

bing crosby/dream a lttle dream of me (from his greatest lp; bing with a beat)/FILMS D'OCCASION PRODUCTIONS
Publié par skorecki à 02:46 Aucun commentaire:


just saw two days in paris ... haven't laughed so much for years ... i just love the way julie delpy woodyallenizes the situations and the dialogues she hears in her head ... it's her own annie hall, only much funnier ... and probably a much better film altogether
Publié par skorecki à 02:36 Aucun commentaire:

this wallpaper is the best i could find ..... 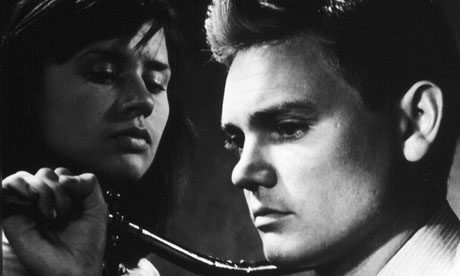 .... .... .... could be said to have created the "look" of ingmar bergman's films, crystallised in three of the director's masterpieces: smiles of a summer night (1955), the Seventh seal and wild strawberries (both 1957) ... from port of call (1948) to the devil's eye (1960), 12 films in all, fischer was able to make visible bergman's visions ... his mentor there was the cinematographer julius jaenzon, who worked with the two great masters of swedish silent cinema, victor sjöström and mauritz stiller ... this put fischer in the direct line of the scandinavian cinematic tradition of the close relationship between the landscape and climate and the psychology of the characters.

His education was further developed by his work with the great Danish-born Carl Dreyer on Two People (1945), only his third film as director of photography. Despite the fact that this virtual two-hander, mostly set in an apartment, was disowned by Dreyer, Fischer claimed that it was a turning point in his understanding of stark lighting.

bergman and fischer's first mature collaboration was summer interlude (1950), in which a prima ballerina looks back on the idyllic summer she spent several years before on an island near stockholm with the boy she loved ... the affair comes to an abrupt and tragic end when he is killed in an accident .... fischer's camera wonderfully captures the limpid swedish summer in the early, lyrical love scenes, shifting to more shaded lighting for the present.

even more rapturous was summer with monika (1952), where an irresponsible teenage girl spends her holiday on an island with a young clerk, but gets pregnant and leaves him holding the baby ... bergman sees little hope for these adolescents in the winter of their discontent after a summer made glorious by fischer's camera.

it is no accident that three of bergman's films have "summer" in the title, and many others were set in that season, the only period of happiness for his characters before the encroachment of autumn and reality, the camera brilliantly recording the transient sun-soaked days ... .... sometimes fischer intentionally overexposed the film to achieve a hallucinatory or dreamlike effect, as in wild strawberries ... the shift from past to present, from memory to reality to dream, is signified by sharp contrasts in light. "I brought to Bergman a fantasy-like style," he explained. "It wasn't about making the scenes realistic but more theatrical, like a saga." In The Seventh Seal, whose luminous images derived from early church paintings, the change from one moral world to another is conveyed through lighting: a bright natural light indicates characters at peace, while heavy filters and backlighting indicate moral doubt.

In the sequence when the medieval knight plays chess with Death, Fischer used two powerful lights to throw the actors into sharp relief, which made it appear that the sky had two suns. When criticised for this, he responded: "If you can accept the fact that there is a knight sitting on a beach playing chess with Death, you should be able to accept that the sky has two suns."

Fischer and Bergman parted company after The Devil's Eye, which switched between an extremely theatrical Hell and the realism of a pastor's household, when the director failed to persuade the cinematographer to soften his lighting techniques. "i felt privileged collaborating with bergman," fischer recalled. "he was never indifferent to photography ... he could be upset if he didn't like what he saw ... why our collaboration ended with The Devil's Eye, i don't really know ... realistically it's most likely that he thought sven nykvist was a better photographer." thus began the bergman-nykvist era, the stylistic change demonstrating how influential the two cinematographers were to the director's oeuvre.

away from bergman, fischer worked on more mainstream movies ... for some of these, he was able to use colour, such as the pleasure garden (1961), with a screenplay by bergman, which was among the four films he made with alf kjellin ... one of the rare films on which fischer worked for a non-swedish director was anthony asquith's two living, one dead (1961) a low-key film noir, shot entirely in sweden with a largely british cast (including patrick mcgoohan and virginia mcKenna) but a mostly swedish crew. fischer also experimented with video techniques to record a series of provincial circus acts for jacques tati's parade (1974).

al jolson in yiddish (remember the jazz singer, the story told, a jazzy vaudeville singer escapes from his father and his future as cantor .... it was the opposite story ...)
Publié par skorecki à 00:01 Aucun commentaire:


i'll be around/anita ellis/ellis larkins trio (from the 1953 film, the joe louis story)
all the songs anita ellis and ellis larkins (he played with mildred bailey, and he's the best pianist for singers) did together are in a record costing a 100 dollars in cd ... i'm trying to find the original vinyl, which is surely less expensive ...
Publié par skorecki à 00:25 Aucun commentaire: