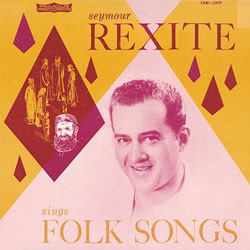 At the height of his popularity in the 1940s and '50s, Yiddish crooning sensation Seymour Rexite starred on 18 half-hour radio shows a week. Whatever song happened to be popular on American radio, his wife, Miriam Kressyn, translated into Yiddish. The son of a cantor, Rexite (originally spelled Rechtzeit) started performing professionally while still in knickers -- the "Wonder-Boy," they used to call him. He hadn't yet reached his teens when he sang before a special congressional committee and then at the White House in a bid to convince the United States government to allow his mother and sisters to emigrate from Poland. Who could have guessed that show tunes from Oklahoma would sound so good in Yiddish?The Kressyn-Rexite concoctions struck big with American Jews. Rexite's smooth-as-scotch tenor won him Sinatra-like adoration from female fans. And Kressyn's translations, always lyrical and often lampoons, pleased and surprised careful listeners. Example: "love and marriage," in her rendition of the well-known 1955 hit of the same name, "geyt tzuzamen vi zup un knaydlakh" (go together like soup and dumplings) instead of "like a horse and carriage."Seymour Rexite lived in lower Manhattan until his death, at the age of 91, in October 2002.


… got my first real dylan experience in july or august 1962 … … on his close up photograph on first lp, he looked so much like michel klein, my meanest best friend, it was unbelievable …i took the lp to the record booth, tried to listen, and quickly decide it was unlistenable … it would take me a year, a whole year, thanks to a song i started to hear everywhere, the flipside of blowin’ in the wind, to decide there definitely was something strange and magical in this donald duck voice trying to emulate charley patton or robert johnson …. this magical song was don’t think twice, it’s alright … …. and it’s still one of my very favourites dylan tunes… a year after being sort of hypnotized by dylan’s first album (by his looks on the cover anyway, so close to my best friend’s looks, a guy that I loved and hated at the same time, and who was -like dylan, maybe- the most selfish egostistical sonofabitch, capable of the most terrible acts of pitiful jealousy), I decided it was time to invest in this strange musician’s first lp ….and I bought it, only to listen to that music longer, closer …. I slowly got acquainted to the words that lay inside, hidden from most persons at the time …. apart from blowin’ in the wind that I’ve hated ever since for its boy scout way …. i quickly decided it was a great record, one of the most personal and strangely haunting I’d ever heard in my life … I was slowly forgetting michel kein’s evil ways, and getting more and more connected with dylan’s own devilish turn of mind …
Publié par skorecki à 23:59 11 commentaires:

out of vaudeville (gene tierney/john stahl/1945)

end of vaudeville/looking for a good hazan